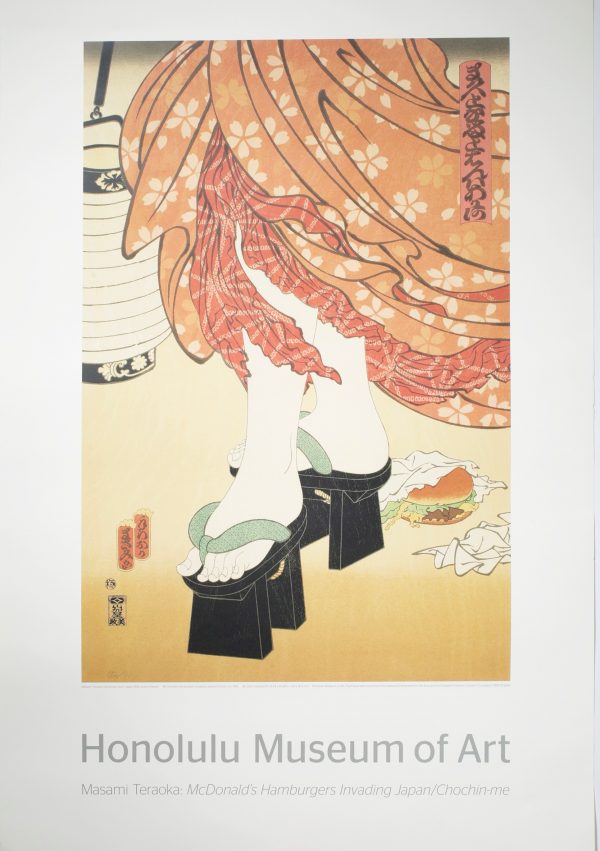 Born in Japan in 1936, Masami Teraoka came to the United States in 1961, and from 1964-68 attended the Otis College of Art and Design in Los Angeles receiving his BFA and MFA degrees. In 1985 he became a U.S. citizen and a permanent resident of Hawaii.

Teraoka's watercolor paintings and prints from the 1970s and early 1980s which mimic the flat, bold qualities Japanese ukiyo-e (woodblock prints from the Edo Period, 1603-1867) fused with American Pop cultural icons, explore the clash of cutural identities, between tradition and modernity, as American consumer businesses and styles came into contact with the established customs of Japan.

In McDonald's Hamburgers Invading Japan/Chochin-me, 1982, a screenprint which imitates the ukiyo-e woodblock printing, the legs and feet of a woman in traditional Japanese dress are seen, with a hamburger and napkins on the ground. She carries a chochin, a lantern. The affixed me means “women.” The artist's title of this print and others in the series highlights McDonald's and its signature food product as foreign “invaders.” He lets the viewer wonder if the hamburger was accidentally dropped or deliberately discarded. He makes a comment on how awkward and messy the hamburger is to handle and eat compared to japanese food eaten with chopsticks, but he also implies the hamburger may have been rejected as unappealing. The scene represents the wider, rapid cultural change Teraoka saw coming to Japan. Teraoka laments the loss of the past and the global homogenizing effect of fast-food culture, but also delights in wryly observing the irony and humor that can result when two ways of life collide.

There are no reviews yet.